Home All The Power of Compounding
AllBusinessPersonal Finance

The Power of Compounding 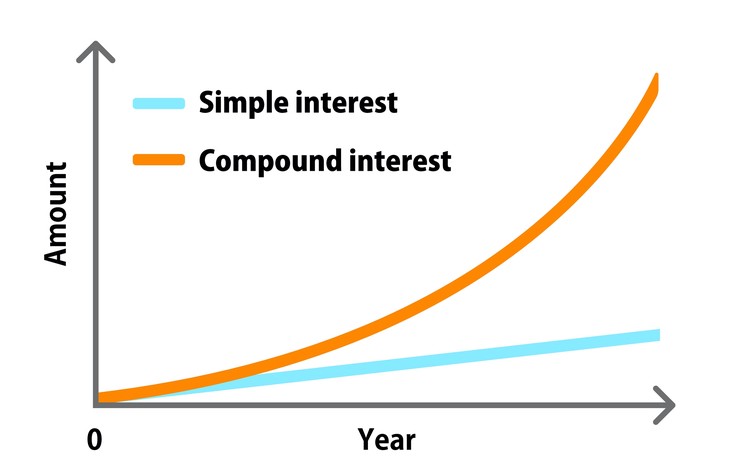 Compound Interest. It’s a simple idea. Leave a dollar in an account which pays interest. Say 10% (we all know that a 10% interest account doesn’t exist right now, but still). Come back next year and you will have $1.10. Forget about it for another year and suddenly you are earning 10% of $1.10 and not $1. By the end of year two you have earned an extra $0.11, vs $0.10 the first year. Incredible right?! I know it doesn’t sound very impressive. But let me explain.

With compound interest, time is your friend. You may have heard the story of the king and the chess playing sage that goes a little like this:

A great king who loved chess travelled across the land to meet a chess playing sage. In order to motivate the sage to play a game with him, the king offered any reward the sage could want. The sage asked only for a few grains of rice distributed in the following way. If he won, the king was to place a single grain of rice on the first square of the chess board on day one. On day two he was to place two grains on square two, on day three four grains on square four. The king readily agreed to this deal, what were a few grains of rice to him and played the game. Three weeks later the king had all but forgotten about the game of chess when a message arrived from one of his advisors.  He was requesting a million grains of rice. “What” shouted the king, “that is half the rice in the city!”. When the king found out it was for the sage he travelled back to see him at once to find out what was going on. He found the sage sitting surrounded by sacks of rice and demanded to know what was happening. “Nothing more than our original deal” the king was told. One week later and the sage owned all of the rice in the kingdom! The king pleaded with the sage to end the deal, to which the sage, who had become more powerful than a king with a grain of rice, agreed.

Whilst this story is one of exponential growth (doubling daily), we can still use the base principle. Earning interest on interest is a super power and one that you can use to your advantage in many areas of life. The story of the king and the sage shows us that small, seemingly insignificant gains accumulate over time and build atop each other to form something formidable and huge. From a financial perspective it is quite simple to understand. If you had taken $100,000 50 years ago and invested it in the S&P500 (which has grown at an average of c.10% annually) you would now be sitting on $11.7 million and making over $1 million a year, all without adding a single penny more. The thing with compound interest is that it takes time. Your $100k will take 7 years to grow to $200k, 17 years to get to $500k, 36 years to get to $3 million, but then only 14 final years to grow from $3m to $11m. It starts slow and the biggest gains come furthest away. Patience is hard.

One of my favourite quotes (it is currently my phone background) is “All the returns in life, whether in wealth, relationships or knowledge, come from compound interest” by Raval Navikant. It showed me that compound interest doesn’t only apply to finance, but in all areas of life. Every book you read you are building on top of your previous knowledge, every hour you spend having a coffee with a friend you are building on top of your previous connections. These things we perceive as insignificant are actually the most significant. Just as we must first earn $0.10 to make our interest grow on money, so we must consistently build on our deposits in other areas of life. That means not chopping and changing, not jumping from interest to interest and new friend to new friend. Consistency.

There is a huge amount you can draw from thinking about life in a compounding mindset. It teaches you not to skip the small things, that the insignificant trip to the gym that you want to skip will actually be the thing that stops you being strong and the evening watching tv is the one that stops you going to college. This leads even further down the rabbit hole of habits and the effect of unconscious decisions on our destinations in life (although let’s leave that one for another day).

Compound interest will make you rich, knowledgable and popular, if only you have the patience for it to work.

How I am Training for Aran by UTMB

My Principles for Life

How I am Training for Aran by UTMB

[…] off day and really don’t want to turn up (if you want more on consistency check out the post on compound interest, consistency for money!) That is 80% of the battle, just showing up. You can go deeply into the […]